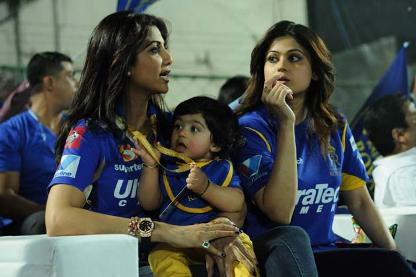 After Rajasthan royals won their first Indian Premier League (IPL) match against the Delhi Daredevils in the capital, the proud owner of the winning team Shilpa Shetty assured that Viaan will also be attending his first IPL match. As promised, the actress brought her baby for the first time into the public eye, during the match between the Rajasthan Royals and the Kolkata Knight Riders.

Earlier, when the actress was asked why Viaan did not attend the match in Delhi, she explained that she had decided to bring her son for his first match in Jaipur, as it was their home ground. Viaan has been to Jaipur before, but this was his first public appearance.

Viaan, at the Sawai Mansingh stadium, was seen with an exclusive Rajasthan Royals Jersey, which has his named embossed on it. Shilpa’s baby was seen along with his mother and Shilpa’s sister Shamita Shetty. The actress was also one of the judges on the reality show ‘Nach Baliye’, where she had to skip the shoot and be present for her son when he was ill. Shilpa was then replaced by choreographer Saroj Khan.

The ‘Dostana’ star and her husband Raj Kundra were blessed with Viaan last year in June. Raj, while talking about the name of his son said that it means full of life and energy.