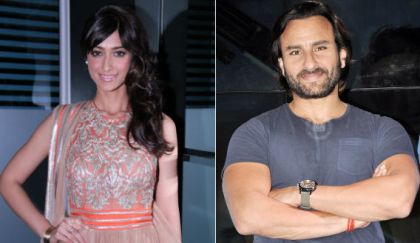 Bollywood actress Ileana D’Cruz started off in Bollywood with the movie ‘Barfi!’ opposite Ranbir Kapoor and Priyanka Chopra. Now the young star is all set to feature in another flick opposite Saif Ali Khan, which will be of a romantic comedy genre. The shooting of the movie is expected to begin in the month of June 2013 and will be directed by the duo Raj Nidimoru and Krishna DK.

Krishna, while talking about the upcoming project said, “It’s a romantic-comedy and we will start rolling the film as soon as Go Goa Gone releases.” The filmmaker went on to say that the movie is yet to be titled and the entire film will be shot in the US. Krishna finally added that he cannot reveal too many details about the project.

The duo of directors are known for making the movies like ‘99’ and ‘Shor In The City’ and have recently finished shooting for the movie ‘Go Goa Gone’, which is all set to hit the theatres on May 10, 2013. Saif is otherwise known for his comic timing and has done similar roles in movies like ‘Hum Tum’, ‘Salaam Namaste’ and ‘Dil Chahta Hai’.

Krishna, while talking about Saif said that he is funny and that he would like to see the actor in just funny roles, rather than serious roles.