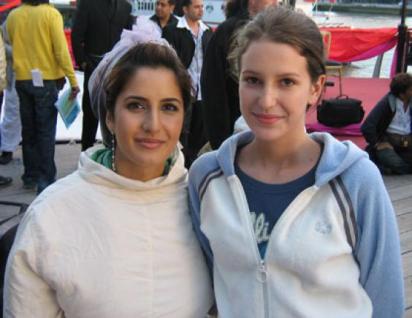 For a long while there has been a lot of speculation surrounding Bollywood actress Katrina Kaif’s sister Isabelle Kaif and her career in the industry. News prints and significant TV ads have already left people wondering as to whether the younger Kaif will make a breakthrough in the Indian Film Industry.

One such report said that Isabelle will star in a crossover movie opposite Anil Kapoor’s son Harshvardhan. Later it was reported that her sister Katrina had recommended Isabelle’s name to filmmaker Ayan Mukherjee. Further reports claimed that Katrina will begin her own production house and will cast her own little sister in her first movie, but nothing came of this.

However, now the younger sibling of the Kaif household is all set to debut in a movie, which is Canadian and co-incidentally Katrina’s former boyfriend Salman Khan is involved in it. The movie is called ‘Dr Cabbie’ and will be produced by the ‘Dabangg’ actor’s Being Human Productions, in association with two Canadian companies, First Take Entertainment and Caramel Film.

The movie will also feature Vinay Virmani, who was last seen in the movie ‘Speedy Singhs’, in the year 2011. The project is estimated to be in the range of $25 million and will be distributed in India by Eros International.