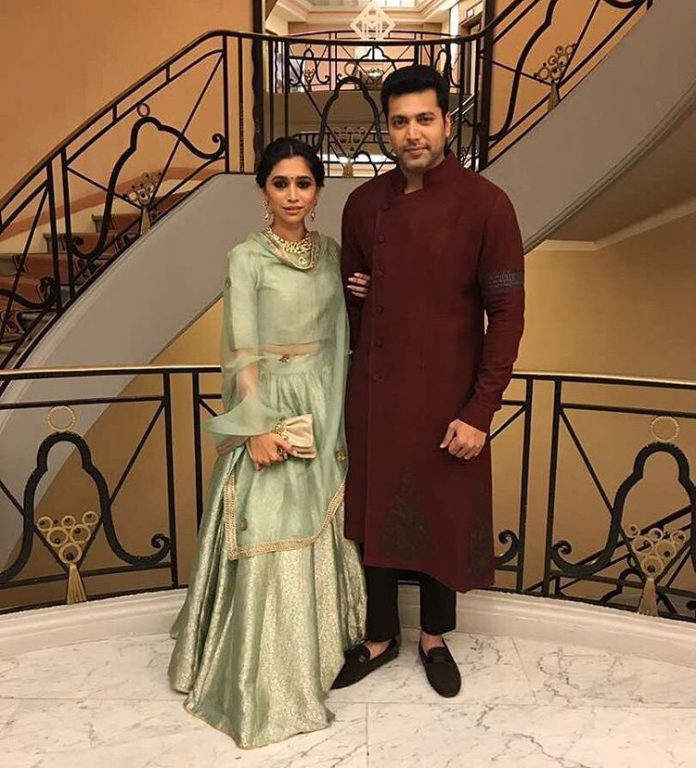 South actor Jayam Ravi made his much awaited Cannes Film Festival 2017 red carpet debut on May 18, 2017 along with wife Aarti Ravi and the entire cast of his upcoming film, Sangamithra including – Shruti Haasan, Arya and director Sundar C, music composer A R Rahman and producer Khusboo Sundar.

Makers of trilingual magnum opus Sangamithra have chosen to unveil the first look of their film at the prestigious film festival and received a massive response from the audience.  Sangamithra reportedly has a bigger budget than Baahubali and is a historical drama, set in 8th century AD revolving around the story of a beautiful warrior princess. It could be a complicated love story or even a love triangle given that the lead star cast has two male actors and only one female actor. However, makers have confirmed that the film will be made in two parts – just like the Baahubali franchise.

While it’s story line is being kept tightly under wraps, makers plan to commence shooting the film in August 2017. Sangamithra is expected to release in 2018.

Let’s start with Sangamithra’s official movie poster featuring Jayam as a lead character in the film!

One of the most chilled out and fun person @arrahman sir an absolute pleasure working with u ??#SangamithraAtCannes pic.twitter.com/exjJYcjB5Z

And we are here at Cannes! The next few days is gonna be surreal ? pic.twitter.com/q26WBFQSNo

Our official kebab mein haddi in Cannes ???but our darling Jammy @arya_offl pic.twitter.com/ypyT8ToLMy

Off to Cannes for the launch of #Sangamitra ? A dream come true ? pic.twitter.com/5zLtjOuTLg