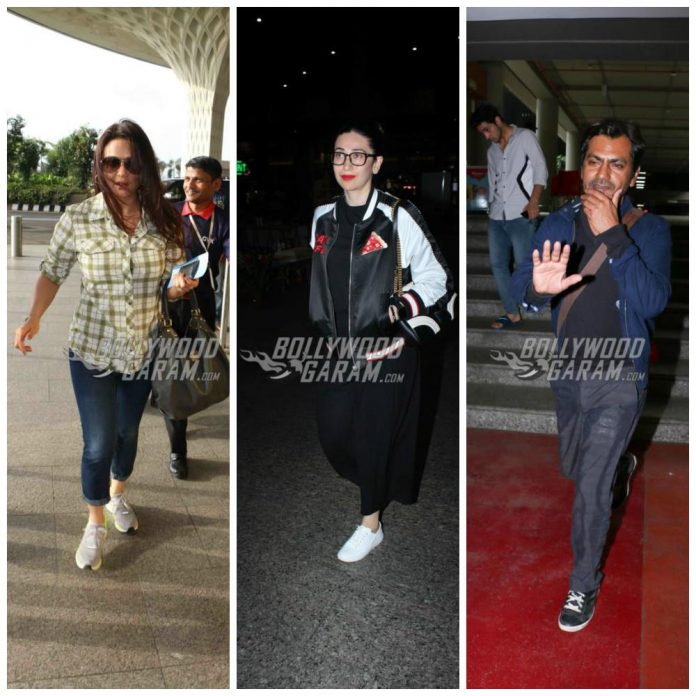 B’Town celebrities often have to step out due to their travel schedules. On one such occasion, actors Nawazuddin Siddiqui, Preiti Zinta and Karisma Kapoor were clicked at the Mumbai airport during their respective travel schedules on May 26, 2017.

Nawazuddin Siddiqui is known for playing supporting roles in Bollywood films, was seen in casuals. He was last seen in Shah Rukh Khan’s Raees and is currently working on Nandita Das’s Manto. Nawazuddin was recently at Cannes Film Festival 2017 to present a peak into Manto, will also be soon seen in Sridevi’s MOM, Babumoshai Bandookbaz, Munna Michael and Chandamama Door Ke in 2017 – 18.

Actress Preity Zinta was spotted at the airport too and she looked comfortable in a flannels paired with denims and comfortable shoes. Recently seen at PM Narendra Modi’s book Mann Ki Baat‘s launch, she has been off the screens for a while. But we hope that she makes her Bollywood comeback soon! See Preity Zinta getting herself pampered at a popular salon

Yummy mom Karisma Kapoor, was also snapped at the airport and looked stylish in black culottes and a black t-shirt paired with a jacket and sneakers. The Fiza actress got legally separated from former husband Sunjay Kapur and is rumoured to be in a relation with businessman Sandeep Toshniwal. On the work front Karisma will soon be seen in Judwa 2 in a cameo role. She had played the female protagonist in the prequel of this movie. Exclusive photos of Karishma Kapoor and Sandeep Toshniwal on a dinner date!