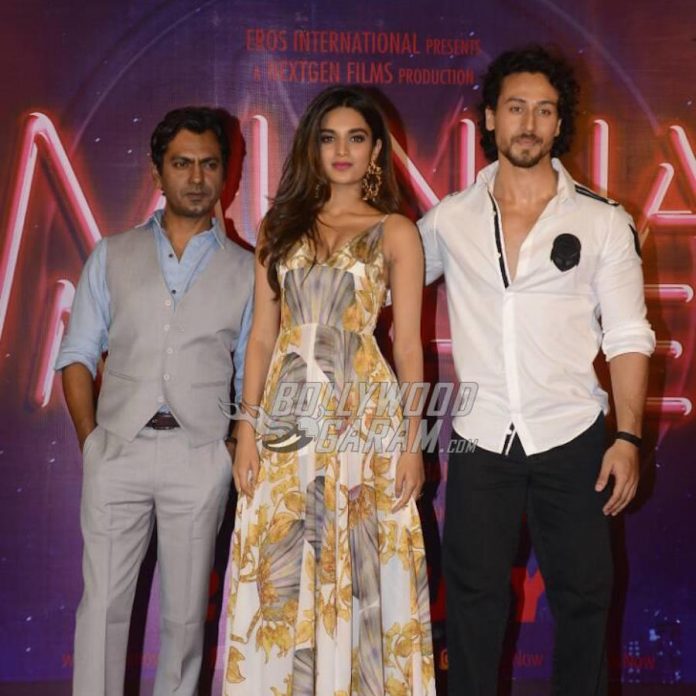 Tiger Shroff, who is known for his dancing skills, will be seen playing the role of a street kid who is a huge fan of the legendary star Michael Jackson. The makers of the film have already generated curiosity among the audience by releasing a few posters featuring Tiger Shroff showing off his 8 pack abs while striking iconic Michael Jackson poses. One of the posters even shows Nawazuddin Siddiqui all set to dance! Nawaz plays the role of a gangster, Mahinder Fauji who aspires to dance.

At the launch event, Tiger looked dapper in a white shirt and grey denims, while Nidhi appeared in a printed maxi outfit. While villain Nawazuddin was seen shaking a leg on stage alongside Tiger! Tiger’s sister Krishna Shroff too attended the trailer launch and wished her brother the very best for his upcoming movie.

The lead actors were all smiles at the event and interacted with the audience and the media. The story of the film is about a young man from the streets , played by Tiger, who is a big fan of the singer and dancer Michael Jackson from a very young age. The movie also stars Sana Saeed, Ronit Roy, Anaika Soti, Chetna Pande, Farah Khan and Shehnaz Treasurywala. The film mark lead actress Nidhi Agerwal’s Bollywood debut and releases on July 21, 2017.