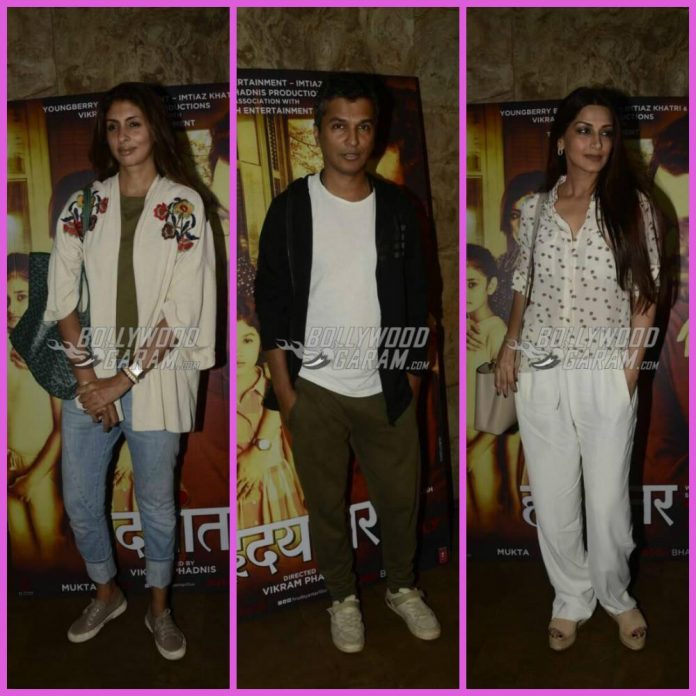 As designer Vikram Phadnis is ready to make his debut as a director with upcoming Marathi film Hrudayantar, friends and colleagues from the industry gathered for a special screening on June 19, 2017. The movie premiere was attended by several celebrities including Shweta Bachchan, Sahil Sangha, Mustafa Burmawala, Sonali Bendre, Manish Paul, Chunky Pandey, Mana Shetty and Kiara Advani among others.

Hrudayantar stars Subodh Bhave and Mukta Barve in lead roles and narrates the struggles of a couple that has been married for 12 long years. The on-screen couple have two daughters, who have been the bonding factor between them for many years. The movie narrates how this family overcomes turbulent times as they uphold their relationships and family values.

The film’s shoot was kicked off by Shah Rukh Khan at the Mahurat ceremony while Hrithik Roshan released it’s official trailer last month. Hrudayantar also marks Hrithik Roshan’s debut in Marathi films as he will be seen playing a cameo role in the film. The film’s official music was launched by Aishwarya Rai Bachchan at an event earlier this month.