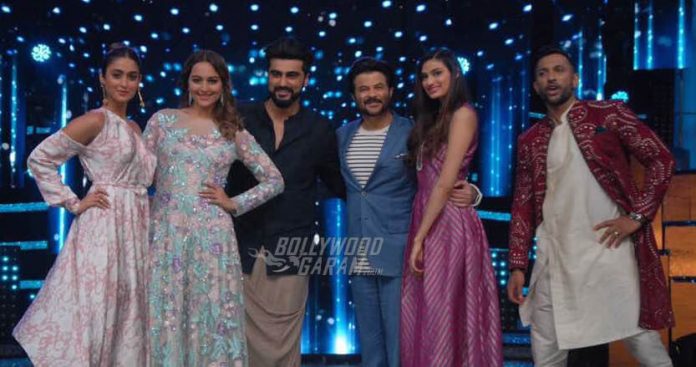 Lead cast of the upcoming film Mubarakan landed on sets of the celebrity dance reality show Nach Baliye 8. Actors Anil Kapoor, Arjun Kapoor, Athiya Shetty and Ileana D’Cruz turned up in a celebratory mood and were seen having fun with Sonakshi Sinha, Mohit Suri and Terence Lewis while shooting.

Going by the pictures, the cast of Mubarakan certainly lit up the atmosphere on sets as they danced and interacted with the audience and contestants. Mubarakan is directed by Aneez Bazmee and is produced under the banner of Sony Pictures Networks Productions. The film is set at the backdrop of a Punjabi wedding in London with a crazy Punjabi family. Going by the trailer, Mubarakan is expected to be a laugh riot. It releases on July 23, 2017.