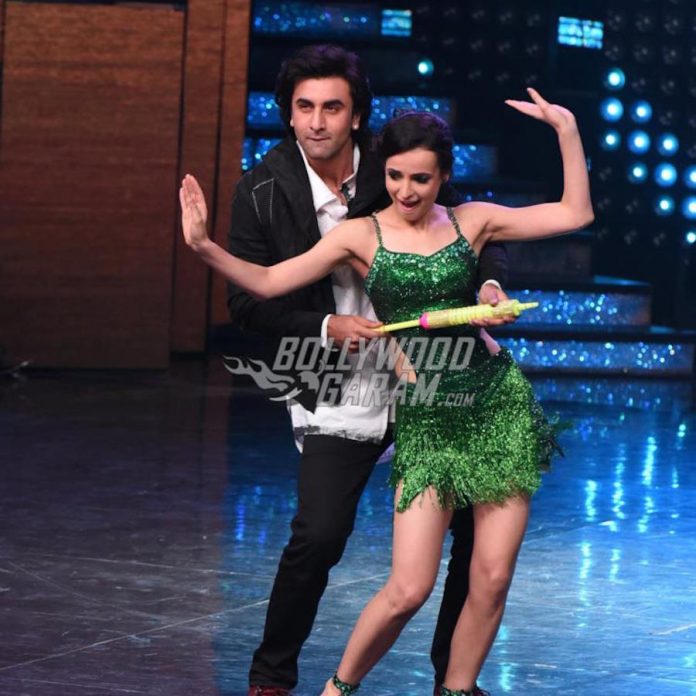 Ranbir Kapoor has always been a charmer. This time the actor spread his magic on sets of Nach Baliye 8 as he promoted Jagga Jasoos on June 22, 2017. Ranbir has always been a favourite amongst the ladies and he showed off his chivalrous side as he grooved to hit songs with Sonkashi Singha, Divyanka Tripathi, Abigail and Sanya Irani!

The Barfi actor looked dapper as he sported a black jacket, white shirt and black pants and managed to mesmerize everyone with his long hair look that he is carrying for his role in the upcoming Sanjay Dutt biopic. He was accompanied by director Anurag Basu and seems like leading lady Katrina Kaif gave the promotional event a miss. Things seem to sour between Ranbir and Katrina after their infamous “ungli mat kar” incident at a recent Jagga Jasoos press conference. Post the press conference, Katrina even gave an exclusive interview where she clarified that she will not be working with Ranbir Kapoor ever again.

About the movie, Jagga Jasoos is an romantic, comedy thriller and tells the story of a teenaged detective who sets out in search for his father with his sidekick (played by Katrina). The film releases on July 14, 2017.

But this is not Ranbir Kapoor’s first tryst with Nach Baliye 8. The actor was initially in talks with makers of the show to host the opening episode of the celebrity dance reality show, but things did not pan out.