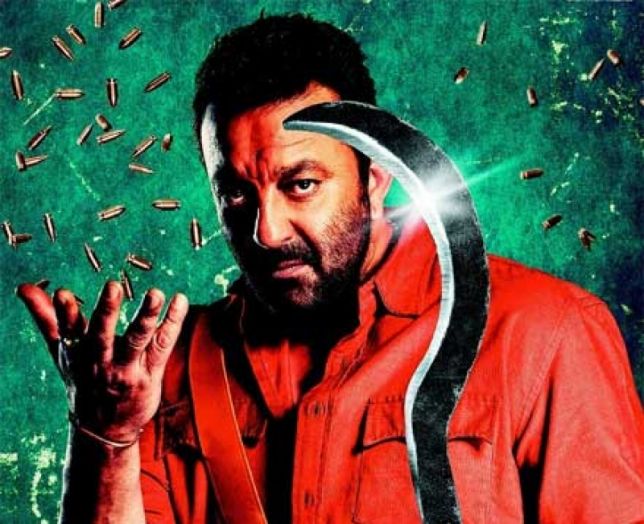 BollywoodGaram.com: Bollywood movie ‘Policegiri’ has become the first Sanjay Dutt flick to be released after his imprisonment. The movie hit theaters on Friday, July 5, 2013 and Sanjay – while in jail – is trying to keep himself updated through his wife Manyata.

The movie – directed by K S Ravikumar – is a story of an honest police officer who changes his principles in order to give corrupt politicians and criminals a taste of their own medicine. In the movie, Sanjay plays both the good guy and the bad guy, just like the way he did in ‘Munna Bhai MBBS’. The movie is actually a Hindi remake of the Tamil blockbuster ‘Saamy’, released in 2003.

The good news is that the movie has all the potential to be an entertainer for the audience, as it has a dramatic storyline, slow-motion scenes, over-dramatic dialogues and a funny villain. As an actor, Sanjay Dutt failed to make an impression the way Salman Khan does in ‘Dabangg’. However, his individuality and style is what makes the movie different and his incarceration is likely to make people curious about his role as a police officer.

Prachi Desai looks pretty, but is young enough to be Sanjay’s daughter. Prakash Raj has put in his own charm as well, with a few funny lines. The most appealing part is the message that appears on the top of the end credits which says, ‘Sanju baba will be back’.

It’s definitely worth a watch as most Sanjay Dutt movies have some good one-liners and unimaginable action scenes which is likely to entertain the audience.