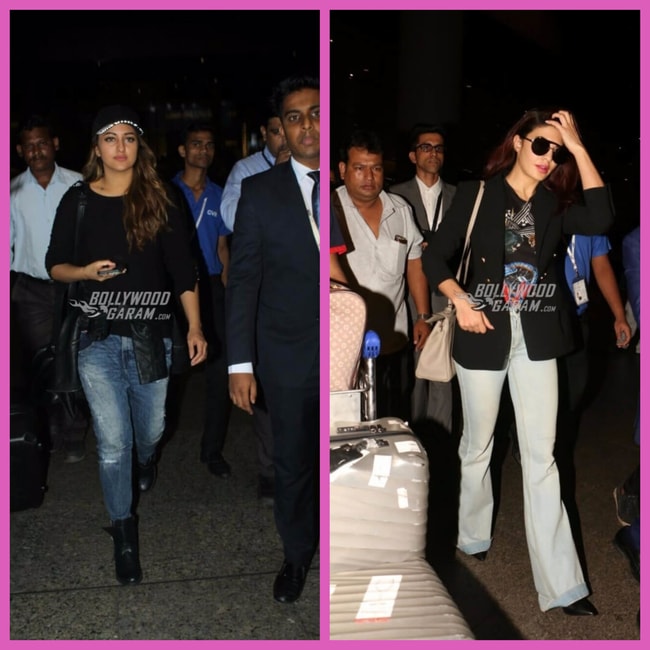 Leading Bollywood actresses, Sonakshi Sinha and Jacqueline Fernandez made a style splash at the airport even as both sported different looks

On their way back home from the famed Da-bangg tour of Salman Khan in London, Jacqueline Fernandez and Sonakshi Sinha were snapped at the airport looking pretty in their casual yet smart outfits. Sonakshi Sinha donned the black top, black cap, black boots and blue denims look and had her black leather jacket tied to her waist. She was seen carrying a black handbag and walked in élan after her entertaining dance performance in London.

Jacqueline, on the other hand, was seen in a black printed tee, black blazer and wide-legged light-hued denims with black pointed footwear. A beige bag, black glares and pink lip shade completed her look.

Jacqueline, these days, is also busy promoting her upcoming film, Judwaa 2 along with her leading co-stars, Varun Dhawan and Taapsee Pannu and were recently seen at a radio station and have been going on tours for song launches. The trio is going all out for the movie promotions that is slated to release on September 29, 2017.

They have also been seen promoting a song from the film, Oonchi Hai Building, Lift teri band hai in an elevator. The song is a reprised version of the original from the 1997 Judwaa starring Salman Khan in the lead. Jacqueline who starred with Salman in Kick will now again be reportedly sharing screen space with him in Race 3. The previous two Race movies had Saif Ali Khan playing the lead.

The Housefull 3 actress has some other projects in the pipeline as well and was last seen in A Gentleman opposite Siddharth Malhotra that failed to create a lasting impact or a blockbuster performance at the box office. However, the hullabaloo around Dera Sacha Sauda’s chief, Gurmeet Ram Rahim Singh’s arrest might be to blame for the under-achieving performance of the film, if reports are to be believed.

Meanwhile, Sonakshi’s last film, Noor that released way back in April 2017 also could not reportedly garner a decent box office collection, even though the performance of the Dabangg actress was well received by critics and audience alike.

Further, reports suggest that Sonakshi will now reportedly star alongside Siddharth Malhotra in Ittefaq helmed by Abhay Chopra, in what will again be a remake of the original Rajesh Khanna, Nanda and Bindu starrer film by the same name released way back in 1969. Ittefaq (meaning ‘coincidence’) will hit the theatres on November 3.

What happens to be a major Ittefaq here, however, is that both the leading actresses of B-Town, Sonakshi and Jacqueline will next feature in remake films!

Exclusive photos of Sonakshi Sinha and Jacqueline Fernandez at the airport!