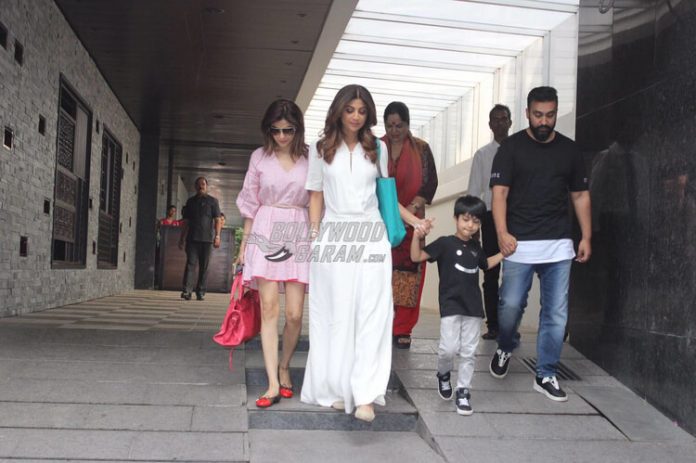 Shilpa Shetty let her hair down this weekend over a lunch outing with family at a popular restaurant in Bandra, Mumbai

Actress-turned-entrepreneur, Shilpa Shetty is often spotted with her husband Raj Kundra and son Viaan Raj Kundra at outings in the city. The happy family was spotted spending some leisure time with not only husband and son but also sister Shamita Shetty and mother Sunanda Shetty on Sunday, November 12, 2017.

While Shilpa was seen in an all-white ensemble laughing and chatting away after enjoying a lunch outing at Hakassan in Bandra, Mumbai, Shamita looked pretty in a soft pink dress with a pair of stylish glares. She rounded off the look with a red handbag and red ballerina shoes. Shilpa, meanwhile contrasted her white gown look with a sea green shade handbag.

Father Raj and son Viaan, meanwhile, twinned each other in black t-shirts. The sisters were seen having a great time along with their mother who was dressed in a long, printed kurta with red salwar and matching dupatta.

Shilpa and Raj were recently seen hosting and attending Diwali parties. The Dhadkan actress follows her fitness regime rigorously and also does not fail to pamper herself with spa sessions. She is also the co-founder of IOSIS Spa centre and has been actively promoting a fit and healthy lifestyle for her fans and followers.

Exclusive photos of Shilpa Shetty with her family after a lunch outing in Bandra, Mumbai!