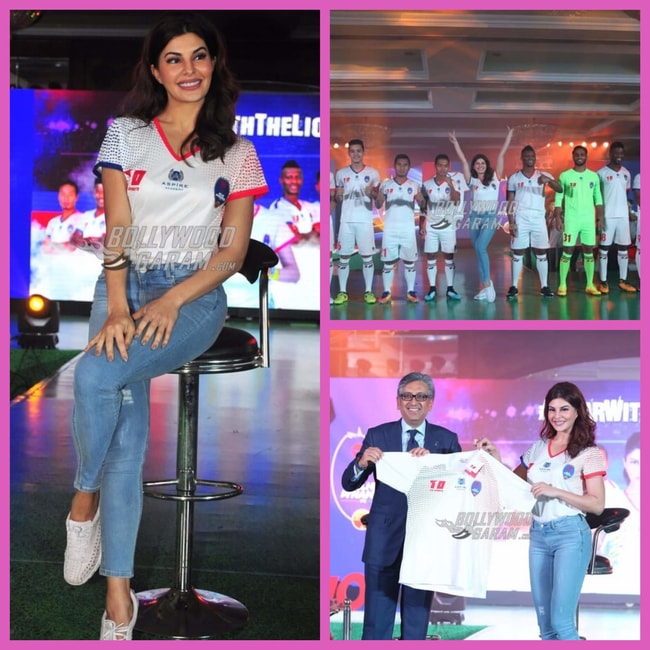 Jacqueline Fernandez is one of the most popular Bollywood star who has not only been active with her films, but also with appearances at events, award shows and promotional events. She has now been roped in as the brand ambassador of one of Indian Super League’s squads, Delhi Dynamos FC and was part of an event where a new kit was launched for the football team ahead of ISL 2017 season 4.

Jacqueline bonded with the entire squad of Delhi Dynamos and was seen in Delhi Dynamos merchandise paired with blue denims and white sneakers. She looked cheerful being a part of the league and posed with the new merchandise of the outfit that was launched at the event. She looked great herself in the new season jersey and was all smiles for the shutterbugs.

The Judwaa 2 actress will boost the club’s fan following across the country engage better with the squad and their performances at ISL. This new jersey will feature red, blue and white colors that represent the club. Delhi Dynamos is the first club to have a female as its brand ambassador for a wider reach among a more enriching demographic for the new season. T10 is the new apparel partner that has come on board for Delhi Dynamos and revamped the kit of the last season. The jersey has red and blue polka dots on either side of the t-shirt along with logos for a more relatable and sporty appeal to the club crests.

Jacqueline also interacted with the press and was quoted saying at the event, “It gives me immense pleasure to be here today and walk the ramp with all the players, I think the new kit looks sporty and fashionable. I’m really excited to put on the jersey and cheer for my team this season.”

The A Gentleman actress excitedly showed off the new, freshly revamped merchandise with the owner of Delhi Dynamos, Dr. Anil Sharma as she along with the other players were seen in the brand new kits as the actress unveiled it at the event held in Delhi.

On the work front, the actress has several films in the pipeline – Drive, Total Dhamaal and Salman Khan starrer, Race 3.