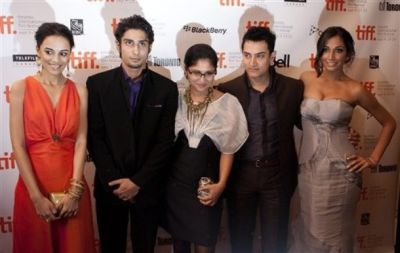 Being a singer in the group Shaa’ir + Func , Monica always wanted to become an actress. And her relationship with the industry is not new, since she has already sung a song for the movie Break Ke Baad. “I do still wake up and pinch myself on that aspect. I didn’t think acting in an Aamir Khan film was an intention of mine, but I’ve always been an actor,” she said.

While Kriti had no plans to act and had been associated in the costume section in the film industry, she said that it was Kiran who trusted her and helped her throughout the shoot.

The two also confessed that they had a great experience with superstar Amir and never imagined that their first movie would have been opposite the Indian star.

Watch the movie trailor of Dhobi Ghat below