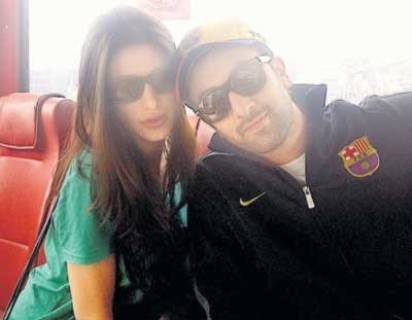 Actress Nargis Fakhri on the day of her birthday on 20th October was given a pleasant surprise by her ‘Rockstar’ co-star Ranbir Kapoor. Kapoor had thrown a surprise party mid air in a private aircraft.

Ranbir and Nargis were on their way to Nagpur, when the whole bash was organized by the actor with the favorite chocolate cake of Nargis and other goodies. The party was well planned by Ranbir, while Fakhri had no clue at all of the party.

At the Mumbai airport everyone had known that it was Nargis’s birthday and had even wished her. But then Ranbir had loaded the cake and the other goodies on the aircraft without the knowledge of the actress.

Nargis was quietly sitting on her seat, when a staff member had taken her out of the cabin by putting up an excuse. And when she was back, Nargis was taken aback when she had seen that the whole aircraft was turned in to a party hall. The whole team, which had also included singer Mohit Chauhan and Hiren Gandhi had sung Happy Birthday song for her. The actress said that she was overwhelmed and emotional when she was cutting the cake and it was great of Ranbir.