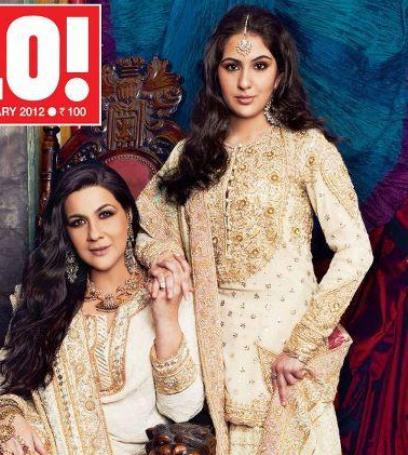 Actor Saif Ali Khan might have moved on in life and is now preparing to get married once again to actress Kareena kapoor, but there is also a world that he left behind many years back. Saif and his former wife Amrita Singh have two children together, Sara and Ibrahim.

Sara is now 16 years old and has recently appeared on the cover of a magazine along with her mother. The beautiful daughter was seen in a stunning golden outfit designed by the designers, Abu Jani and Sandeep Khosla.

A proud mother of the daughter while talking to the magazine said that her daughter is now 16 year old and is a bright student of science. Singh added that like all bright students Sara too aspires to become a doctor.

The actress even said that her daughter might even become a sharp lawyer. While talking about the career of her daughter, Amrita said that the nest two year will be critical for Sara as this will be the time when she will be deciding her career. Looking at the picture, it is clear that Sara has definitely got the good looks from her mother and the charm of her father. There are also chances that Sara might even chose acting as her career.