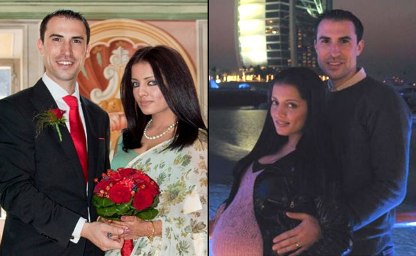 Bollywood Garam: Its celebration time for Bollywood actress Celina Jaitley and her husband Peter Haag. The couple who got married in the year 2011 and have been blessed with twin baby boys on March 24, 2012. Peter and Celina have two healthy boys who have already been named as Winston and Viraaj. The Austrian-based businessman and hotelier released a statement to break the happy news.

The statement said, “Yes our angels from heaven are here and we are very happy. Celina and the boys are doing very well healthwise too. We just want everyone to bless our handsome boys.”

The couple are excited and cannot wait to spend some quality time with the twins. Last year, Jaitley announced her engagement with the Dubai-based Austrian businessman Peter.

In the year 2010, Celina’s marriage rumors began doing the rounds after which the actress came out and denied that she has got married. On July 23, 2011 the ‘No Entry’ actress got married to Haag at a thousand year old monastery in Austria. After marriage, the two started residing in Dubai. In the month of September 2011, the actress revealed that she was expecting twins.

During pregnancy, Celina tweeted, “Maternity break…its difficult to dance n seduce the hero whilst pregnant with twins,”. Recently, the two had even posted a picture on Twitter during the Christmas season. The picture showed the actress flaunting her baby bump, while she was carrying her twins. Celina Jaitley has become the latest yummy mummy of Bollywood after Aishwarya Rai and Lara Dutta (both former pageant winners) . The next in the line is the hot actress and an IPL team owner Shilpa Shetty, who is also expecting her first child along with husband Raj Kundra.