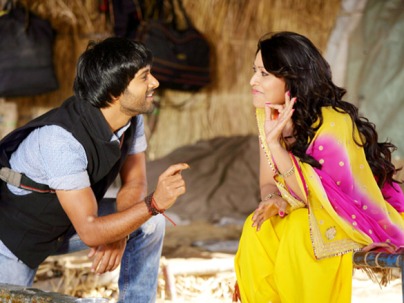 BollywoodGaram.com: After a long time, it is quite refreshing to watch a new face play the lead role in the movie ‘Bittoo Boss’ released on April 13, 2012. The movie has the cast of Pulkit Sharma as Bittoo and Amrita Pathak in the lead roles.

The story of the movie is about Bittoo, a good-hearted videographer, who begins by making blue films but ends up solving issues between couples. The concept might be interesting, but the audience also depends on the attempts to execute the story in a proper and entertaining way.

The movie begins with a big fat Indian Punjabi wedding, which is quite similar to that of the typical Sooraj Barjatya movies. Debutant Pulkit plays the role of a bit of a brat, but is sincere and even idealistic at the same time.

The only thing the movie lacks is its finishing, but the movie is also a worth watch due to the sincerity of the director Supavitra Babul in terms its intent. The director should also be appreciated for bringing out the darker side if the heroism of a debutant which most of the film makers shy away from. And this is the reason one must go in to checkout the movie just to look out Bittoo’s character.