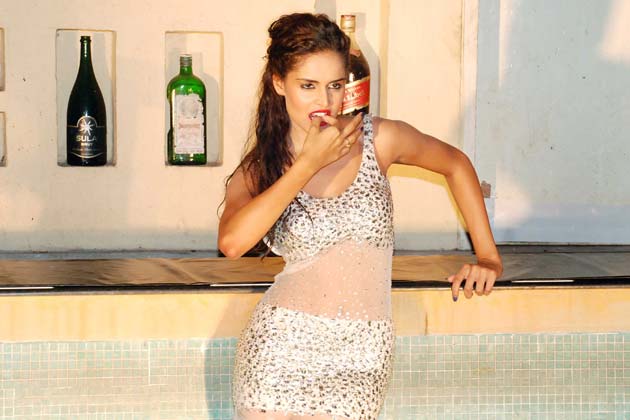 BollywoodGaram: Kingfisher Calendar Girl and Brazilian model Nathalia Kaur is all set to make her Bollywood debut with the upcoming movie ‘Department’. Kaur will be seen in a steaming item number titled ‘Dan Dan’ in the film by Ram Gopal Varma.

Interestingly, the song will show the fresh model surrounded by more than 200 men. Kaur claimed that her item number is a turning point in the movie as it helps the lead actors in the movie, played by Sanjay Dutt and Rana Dagubatti.

The upcoming actress and item girl said, “The music has a Marathi feel and is energetic. The dance steps are amazing too”. Nathalia also revealed that her choreographer Ganesh Acharya felt that she would not be able to pull off the routine initially, but was later pleasantly surprised.

While talking about the song, the model said that her character was powerful, but does not lose the sensuality of being a woman. Kaur also said that she will be seen dancing with many men, but is also controlling them. The description of the item number seems similar to that of Katrina Kaif in Chikni Chameli, which was also choreographed by Acharya.