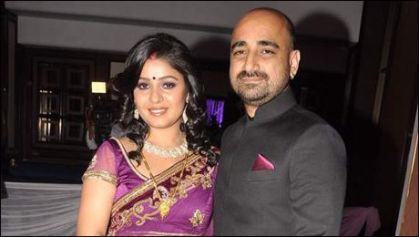 Bollyood’s singing queen, Sunidhi Chauhan on April 26, 2012 to her childhood friend Hitesh Sonik in Mumbai. Sonik is known for his music compositions for the movies like ‘Stanley Ka Dabba’ and ‘Pyaar Ka Punchnama’.

Chauhan was earlier married to choreographer Bobby Khan, but got separated just a year after she tied the knot. Sunidhi who has been one of the judges on the singing reality show ‘Indian Idol’, has known Sonik for 15 years.

Hitesh while talking about Sunidhi said, “She was a little more than a child when she won the Meri Awaz Suno music contest on television. That is when when we became friends. Gradually, over the years as she grew into a fine singer, our friendship blossomed into love”.

A wedding reception was thrown by the newly wed couple at a 5 star hotel in Mumbai, which was attended by the who’s who of Bollywood as well as the Music industry. Some of the popular names like Asha Bhonsle, Udit Narayan with wife Deepa Narayan attended the ceremony. Besides the reception was also attended by the celebrities like Konkana Sen Sharma with husband Ranveer Shorey, Shaan, Kavita Krishnamuthy and Alka Yagnik.