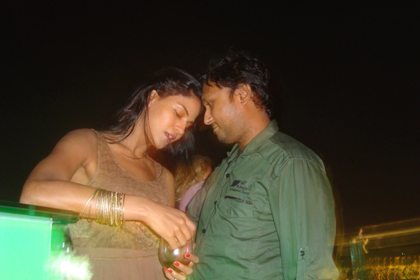 Controversy queen, Veena Malik has constantly been in news and has once again made it in the front. The Pakistani actress has always made news for her raunchy acts, but this time she has been noticed for her closeness with director Hemant Madhukar.

Malik was recently spotted on an intimate date with the film maker in Mumbai. The intimate moments between the alleged couple were captured in a camera, which even captured all the feelings of the couple.

The pictures that were leaked cannot be denied by Veena and Madhukar. Moreover, the pictures have been released, while the actress is getting ready for her upcoming reality show ‘Swayamwar’ in which she will be searching a prospective groom for her.

Malik was noticed by the general public when she appeared on the popular reality show ‘Bigg Boss’ for her open intimacy with actor Ashmit Patel. Later the actress even posed nude for a magazine and later denied that her pictures were morphed. Madhukar and Veena have been working together on the movie ‘Mumbai 125 kms’. However, this is not the first time the actress has been linked to someone. It is time to wait and watch if the two come out in public and confess their love for each other.