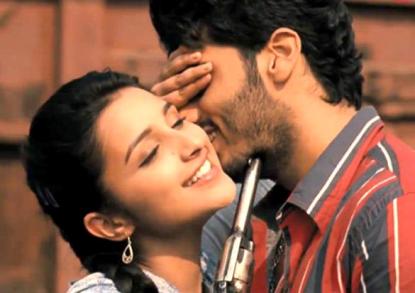 The much awaited movie ‘Ishaqzaade’, which is a debut for Boney Kapoor’s son Arjun Kapoor, has been released on May 11, 2012. The movie also stars Parineeti Chopra and has been directed by Habib Faizal.

Seems like, Bollywood is these days venturing a lot on locations outside Mumbai, so as to give it the actual rustic feel. The story is based in a small town in northern India where the politics and the society plays an integral part in the movie.

Parineeti in the movie plays the role of Zoya, while Arjun will be seen playing the role of Parma, who belong to two rival political parties. The two face each other in the upcoming elections but then end up falling in love with each other.

As the two fall in love instead of hating each other, the clashes obviously occur and intensify the situation. The story might be a bit similar to that of Romeo and Juliet. The narration of the story does not waste too much of time to enter the love story portion. Such an execution maintain the interest of the audience and even avoids confusion. Music provided by Amit Trivedi has already become a hit, while Gauhar Khan will be seen in a hot and sizzling item song, as prostitute Chand.