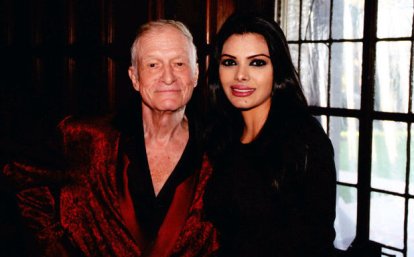 BollywoodGaram.com: Indian actress Sherlyn Chopra – who has become the first Indian celebrity to appear on the International magazine Playboy – spoke about her experience during the much hyped photoshoot. The small time Bollywood actress said that it wasn’t easy to pose for the magazine.

While talking to BBC Hindi, Chopra said that she did not want to “miss the opportunity of posing nude for the world’s most established adult magazine”. The founder of Playboy magazine, Hugh Hefner tweeted that Ms Chopa will appear in the magazine’s November issue.

The magazine is banned in India but people can still access it over the internet. Chopra said, “It is not an easy task to be nude in front of the camera and look good at the same time”. The actress even revealed that she had emailed Hugh and expressed her desire to pose for the magazine.

The former Bigg Boss contestant added, “I have become the first Indian to pose naked for Playboy and nobody can take away that achievement from me.” Chopra also said that the magazine got back to her within three to four days. Sherlyn went on to say that her sister is proud of her achievement but she has not told anything about it to her mother and added that she would meet her and tell her that she will have to accept her the way she is.

Sherlyn Chopra will appear nude in the November 2012 issue of Playboy magazine.