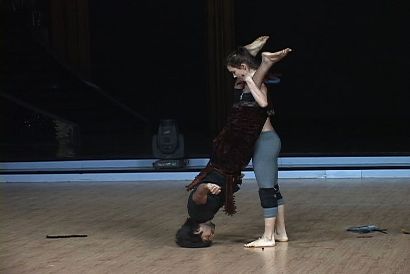 Just a day before the show ‘Jhalak Dikhla Jaa’ was about to hit the floors, choreographer Salman Yusuff injured his neck during the technical rehearsals and had to be rushed to Kokilaben Dhirubhai hospital. Salman injured his neck and despite several efforts he could not even stand on his own.

Salman accompanies the celebrity Isha Sharvani on the show and till now the pair have maintained the record of securing 30 on 30 marks for their performances from the judges. But after Salman’s injury choreographer Cornell stepped in to Salman’s shoes and was paired with the actress at the last minute.

The pair managed to impress the judges but the celebrity failed to maintain her record of 30 on 30 marks as the judge Remo D’Souza gave 9 marks out of 10. Isha and Cornell performed on an Afro Jazz number which was based on the theme fusion for the show.

The ‘Kisna’ actress has till now maintained the top position on the show giving a tough fight for the other celebrities. Meanwhile Salman has been asked to take rest and Isha will be performing with Cornell for the mean time. Recently at the wild card episode, two new celebrities Rashami Desai and Ritwik Dhanjani joined on the show to make it more tough for the fellow contestants.