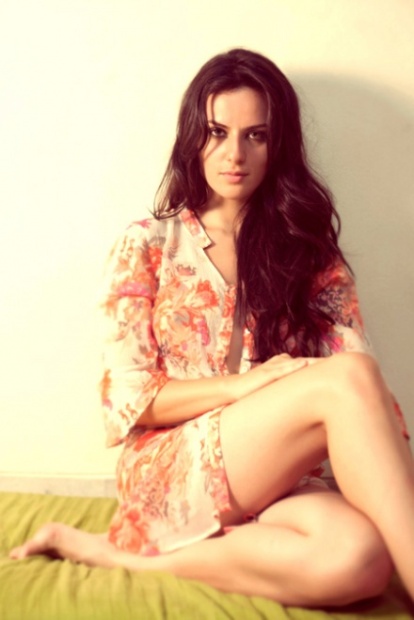 Moscow-based model Elena Kazan – who recently emerged from the fashionable world of modeling into the glittering world of Bollywood – is all set to get a firm footing in the famous Hindi film industry.

The model was seen in the movie ‘Agent Vinod’ starring Saif Ali Khan and Kareena Kapoor and was also seen in an ad featuring Saif and Shahrukh Khan, and our Bollywood Garam sources state that hot Elena has a lot more on her plate besides photo-shoots.

Kazan’s first love will always remain modeling, but these days she seems to be busy with film shoots.

The Moscow-born damsel has Russian and German roots and grew up in Germany. She is a true beauty-with brains because apart from Russian, French, German, English and Spanish, stunning Elena is surprisingly well versed with Indian languages such as Hindi and Bengali.

Kazan recently did an ad for a liquor brand with Shahrukh and Saif and said that she had “quite an experience” shooting for it. The ad is already on air, incase you have not seen it yet.

After doing the hot bikini act in Agent Vinod, Kazan has now signed up for a new project which will be directed by Ahishor Solomon and will be produced by Anjum Rizvi and K. Asif.