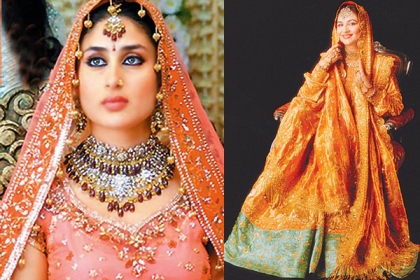 BollywoodGaram.com: Bollywood stars Kareena Kapoor and Saif Ali Khan are all set for their highly-anticipated wedding, but have still not revealed their wedding ceremony details. However, according to our sources, a grand banquet has been scheduled for October 18, 2012 at Pataudi.

Celebrity designer Ritu Kumar will be designing Kareena’s vintage outfit, gifted by her mother-in-law to be – Sharmila Tagore. Ritu, while talking about the outfit, said that it has been recreated using gold Benaras fabric, woven in the likeness of the fabric which had been used in the original ensemble.

The traditional outfit includes a farshi pyjama, kurta and a dupatta, which is made out of rust and gold tissue and is in contrast to the soft green satin gote at the hem.

Talking about the wedding venue, reports say that the reception will be full of celebrations and the actors have booked a South Mumbai five star hotel as part of the lead up festivities.

According to some sources, the hotel has been booked from October 13 to 17, 2012 for the various functions which will be held before the wedding day. Even the security of the hotel is believed to have teen tightened for the day.

Reports also state that Saif has  booked another hotel for the same dates in Mumbai which might be to divert the media or just to put up guests in the hotel.

In this picture, Sharmila Tagore poses in her bridal attire with her late husband Mansoor Ali Khan Pataudi. This is the wedding dress that Kareena Kapoor will reportedly wear when she gets married to actor Saif Ali Khan on October 16, 2012.