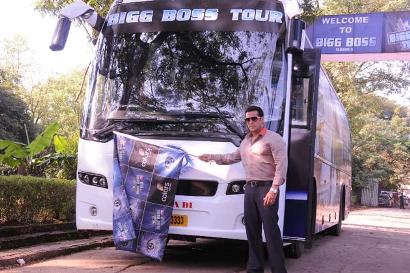 In some good news for Bigg Boss fans, there is an opportunity for the people to watch the celebrities live inside the house, which is located in Lonavala. Bollywood star and the host of the show Salman Khan flagged off the Bigg Boss tour bus, from which people will be able to see the contestants live at the production control units

Khan said, “I am lucky that I get to see all this up-close. But those who watch it on TV, even they must be wanting to see these celebrities. Such people can come here and take a tour of the bus”.

Salman also said that the show has been set up in Lonavala which is a beautiful tourism location. The good part is that there is no selection procedure as to who gets a seat, and the bus will charge Rs. 2,000 per head. The money raised from the tour will be donated to Salman’s NGO ‘Being Human’.

The ‘Dabangg’ actor appealed to people to be a part of the shows experience. The actor assured everyone that the entire cost of the tickets will be going to the NGO. Salman did clarify however, that he will not be riding in the bus, and people shouldn’t expect him to be there.