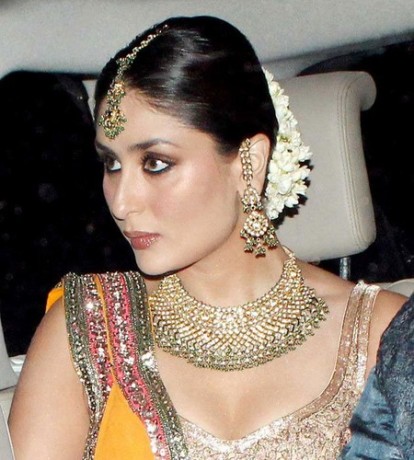 BollywoodGaram.com: After being in a relationship for around five years, Bollywood couple Kareena Kapoor and Saif Ali Khan are all set to tie the knot in Mumbai on October 16, 2012. The celebrations began with a Sangeet ceremony, which was a private affair and had just a handful of stars in attendance.

The ‘Taashan’ couple registered their marriage at Saif’s house on October 16, 2012 and the wedding will be attended by just close friends and family. But the celebrations do not end there, as Saif’s ancestral home Pataudi Palace in Haryana is being decorated and readied for the ‘Nikah’ on October 17, 2012, after which a reception will be held on October 18, 2012.

At the wedding, the “Heroine” actress is expected to wear a traditional Sharara designed by Ritu Kumar and Saif will be wearing outfits designed by Raghavendra Rathore. On Sunday, the Sangeet ceremony was attended by a few guests including Malaika Arora Khan, Amrita Arora along with her husband Shekeel Ladak, Karan Johar, Soha Ali Khan and beau Kunal Kapoor and other family friends.