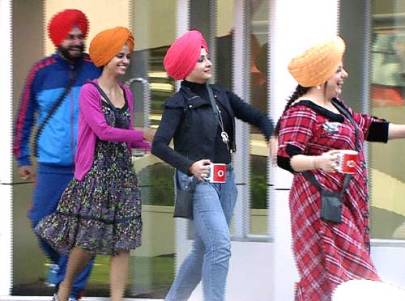 BollywoodGaram.com: Bigg Boss 6 is now slowly following the format Salman Khan had promised before it began. In the episode telecasted on October 15, 2012, the contestants were seen in a jolly and flirty mood and sporting colorful turbans!

So what happened on this episode? As Delnaaz is not responding to Rajeev’s approach, the actor is now trying his flirty side on the other girls like Sayantani and Karishma.

On the other hand, even Delnaaz could be seen singing the song ‘Hum tum Ek Kamre Mein Band Ho’ to Aseem Trivedi, who was seen blushing and tried to join her. Seeing this Rajeev tried his best to charm his former wife, but to no use.

Later Delnaaz was seen wearing the Punjabi turban with the help of Navjot Singh Sidhu and looking at this, Urvashi and Sayantani also joined in and sported the turbans while singing the song ‘Singh Is King’.

A little later Bigg Boss announced the task ‘Chipak Ke’ for the housemates, but Kashif and Rajeev were not part of it as they have been nominated for next eviction. The winner of the task gets to be the captain of the house. A little later Karishma came to know that her father was not well and felt guilty that she wasn’t there to take care of him. Bigg Boss then called her to the confession room and told her that her father is watching the show and loves her in it.