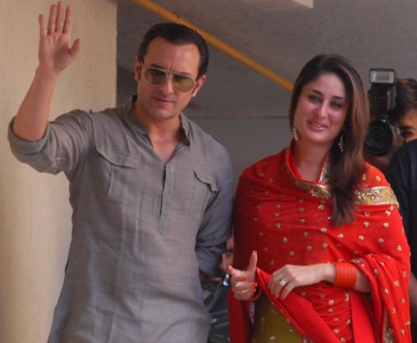 Bollywood couple Saif Ali Khan and Kareena Kapoor are now officially husband and wife. Several Bollywood celebrities turned up for the wedding reception of the couple, dubbed ‘Saifeena’ by the media, on October 12, 2012 in Mumbai.

A major banquet was hosted at the Taj Hotel in South Mumbai after a registered marriage was held at Saif’s residence on Tuesday afternoon. The family members from Bebo’s side included her mother Babita, father Randhir Kapoor, sister Karisma Kapoor, Rishi Kapoor and wife Neetu, Ranbir Kapoor, Rajib Kapoor and Shashi Kapoor.

From Saif’s side, his sister Soha Ali Khan, daughter Saara and son Ibrahim were seen at the wedding reception. Apart from the family members, some celebrities also graced the event. Among those spotted were Anil Kapoor, Shahrukh Khan and wife Gauri, Salman Khan’s sister Alvira, a pregnant Amrita Arora with her husband, Sonam Kapoor, Priety Zinta, Fardeen Khan, R Balki and Gauri Shinde.

There was also some speculation that the couple may have a ‘nikah’ at the hotel, but it could not be confirmed. Kareena Kapoor arrived in a green salwar and red dupatta in the afternoon, while Saif appeared in a grey kurta and white pyjamas. Kareena and Saif got hitched after dating for five years. In a recent interview, Kareena also revealed that she and Saif had been living together for the past few years.