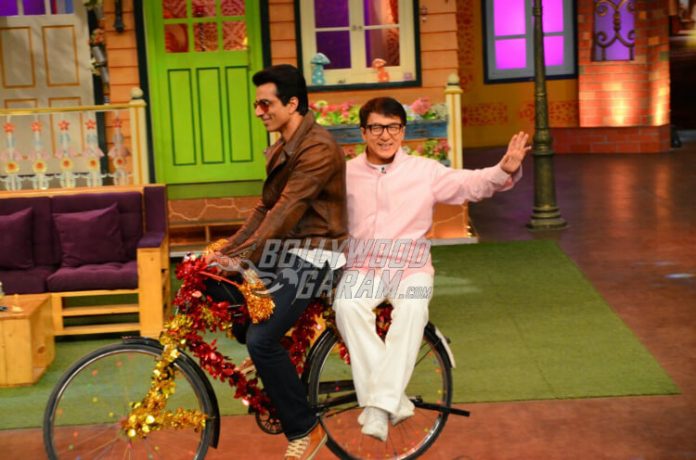 Jackie Chan was Spotted at The Kapil Sharma Show shortly after he landed in Mumbai today morning!

Jackie Chan and Sonu Sood were spotted on sets of The Kapil Sharma Show to shoot a promotional episode for their upcoming movie Kung Fu Yoga, on January 23, 2017. He headed straight to a Press Conference after wrapping up the shoot.

Jackie chose to make a dramatic entry, seated on the back of a typically decorated bicycle while Sonu Sood rode in!

Kung Fu Yoga is directed by Stanley Tong and will be released on February 3, 2017, in India. The movie stars Sonu Sood and Disha Patani opposite Jackie. The film is a Chinese-Indian co- production of Taihe Entertainment and Shinework Pictures (China).

The acclaimed international actor greatly admired the live wax statues modeled especially for him and Sonu Sood, for the show.

Jackie and his co-star Sonu Sood seemed to have lot of fun during the shoot!

Raveena Tandon too made a special appearance on the sets and will be seen in the Promotional episode of The Kapil Sharma Show starring the entire cast of Kung Fu Yoga.

Check out the complete gallery of Disha Patani and Amyra as they shot alongside Jackie for a promotional episode of Kung Fu Yoga on The Kapil Sharma Show!

The entire cast and crew strike a dramatic Kung Fu pose for the cameras!