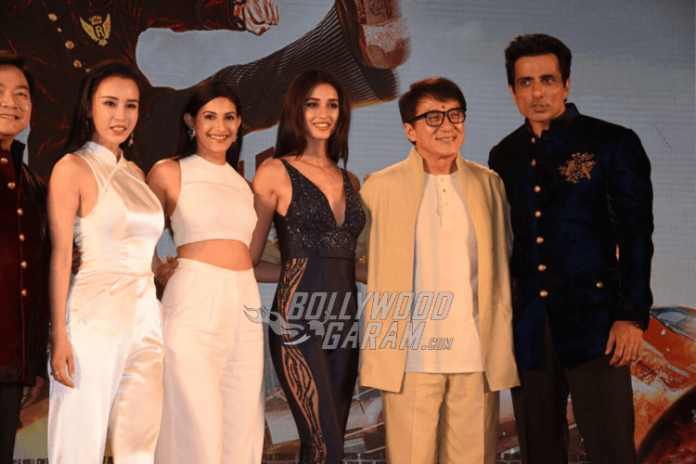 Jackie Chan with his cast of Kung Fu Yoga were snapped while the were heading to press meet, just after shooting for an episode of The Kapil Sharma Show today, January 23, 2017.

The Internationally acclaimed Kung Fu artist was given a warm Indian welcome today morning as he landed at Mumbai Airport.

The event is being held for the promotion of his upcoming movie Kung Fu Yoga, directed by Stanley Tong. Sonu Sood And Disha Patani are sharing screens with Jackie Chan in this movie. The movie is scheduled to release on February 3, 2017 in India and on January 28, 2017 in China.

Sonu Sood was earlier spotted at Mumbai airport to receive Jackie Chan as he arrived today morning. They then headed to the Kapil sharma Show for promoting the movie where Disha Patani and Amyra were also snapped for promotions.

Jackie arrived at the Press Conference venue in the same outfit he wore for shooting a promotional episode for The Kapil Sharma Show.

However, he changed into a Kung Fu Master inspired beige costume shortly after, for the event.

She showed of some killer yoga moves like the Cobra Aasan below and matched up to Jackie’s Kung Fu skills.