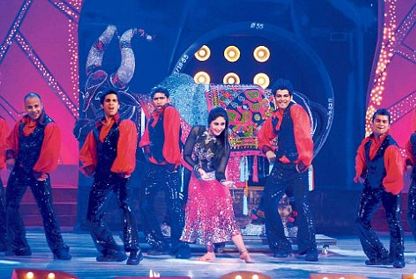 After winding up all her wedding celebrations, Mrs. Kareena Kapoor Khan is now back to doing what she does best. The actress was lined up for a performance at the People’s Choice Awards, and she delivered once again.

The ‘Jab We Met’ actress was set the stage on fire with her sizzling moves, while she performed some of her greatest hits – ‘Chammak Challo’ from ‘Ra.One’, and ‘Halkat Jawani’ from ‘Heroine’. The actress was originally supposed to be joined by husband Saif Ali Khan, and the awards was supposed to be their maiden performance post marriage. Saif was reportedly not feeling well due to which he decided to give it a miss.