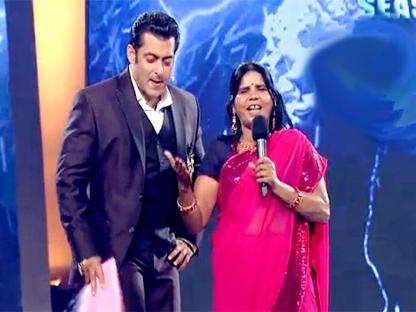 Gulabi Gang leader – Sampat Pal, who loved to affectionately hug everyone, has become the latest contestant to be eliminated from the reality show Bigg Boss 6. The woman known for her pink saris stayed in the house for five weeks and was referred to as ‘mataji’ by the other housemates.

Sampat took some time to get along with other celebrities on the show, as she belonged from a completely different background and lifestyle from the rest. Throughout her stay in the house, Pal did not leave her fetish for pink and was seen wearing a lot of pink clothing.

Her friendship with celebrity hairstylist Sapna Bhavnani did not last long, as the two were seen drifting apart and were also seen to back-bite each other. Pal’s most talked about point in the house came at the ‘Rajneeti task’, which she took it bit too seriously and fainted when her team’s loss was announced.

Due to her simple personality and innocent sense of humor, Pal was an endearing figure in the Big Boss house. On many occasions, the Gulabi Gang leader sang incident relevant songs, just to entertain the housemates. Even her stories and the way of speaking was a hit with the housemates.