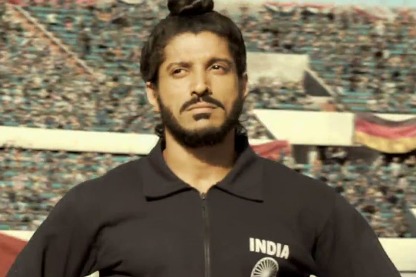 Makers of the upcoming movie ‘Bhaag Milkha Bhaag’ have given viewers a first glimpse of the flick. The movie will be based on the real life story of the popular Indian athlete Milkha Singh.

Singh was nick named The Flying Sikh and represented India in the 1960 Summer Olympics in Rome and the 1964 Summer Olympics in Tokyo. During the India-Pakistan partition the athlete lost his family members and the flick will narrate Milkha’s inspiring journey as an athlete.

The movie will have Farhan Akhtar and Sonam Kapoor in lead roles and it’s being directed by Rakeysh Omprakash Mehra of “Rang De Basanti’ and ‘Delhi 6’ fame. In the short preview, Farhan looks as though he had beefed up for the role.

Reports say that Singh sold his story to the filmmakers for just one rupee and the profits of the flick will be used to the benefit of upcoming and needy athletes. The shooting of the movie began in February, 2012 and was shot majorly in India. Some portions of the movie will also be shot in Tokyo, Melbourne and Rome. Earlier, A R Rahman was supposed to do the films music score, but then due to his busy schedule the trio of Shankar Ehsaan and Loy were roped in.

The movie ‘Bhaag Milkha Bhaag’ is expected to hit the silver screen on July 12, 2013.