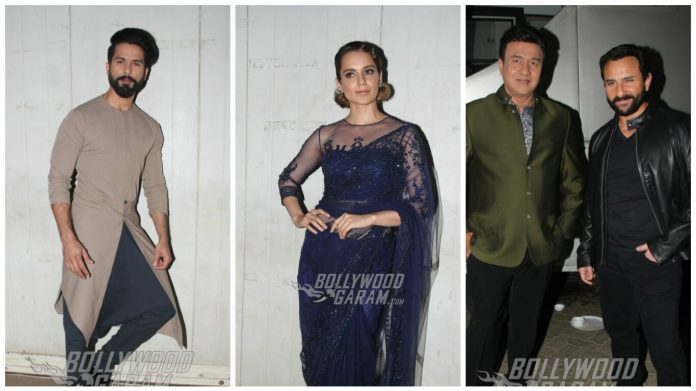 Kangana Ranaut, Saif Ali Khan and Shahid Kapoor are currently shooting for a promotional episode of Indian Idol Season 9 – Check out all the photos!

The star cast of Rangoon, Saif Ali Khan, Shahid Kapoor and Kangana Ranaut just showed up at the sets of Indian Idol Season 9 for promoting their upcoming movie Rangoon.

Check out all the pictures below –

Rangoon is an upcoming period drama film, directed by Vishal Bhradwaj and produced by Sajid Nadaidwala, Viacom 18 Motion Pictures. The movie is set in the backdrop of World War 2. It is speculated that Kangana Ranaut’s role supposedly portrays the life and times of Mary Ann Evans aka Fearless Nadia, who was Bollywood’s first original stunt-woman and still remembered for her fiery role in the movie Hunterwali.

Kangana Ranaut and Shahid Kapoor  were also spotted on sets of The Kapil Sharma Show for promoting their movie, last week. They had a blast while shooting the promotional episode!

Meanwhile leading lady Kangana Ranaut wore a lovely navy blue embellished saree, with a sheer blouse. She wore her hair, retro style which completed the look and complemented the theme of the movie perfectly.

This is Kangana’s first movie in 2 years and we wish her the very best for the success of Rangoon. Don’t forget to catch the episode of Indian Idol Season 9 featuring the entire star cast.

Stay tuned for latest updates on your favorite stars only on Bollywood Garam!