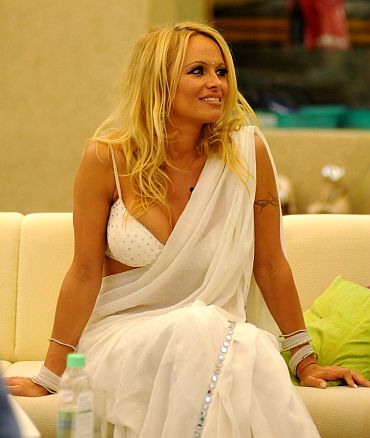 Call it a shocking revelation or a publicity stunt of Bigg Boss 4, but it is surely going to surprise the loyal audience of the reality show. A Mumbai afternoon daily, Mid Day, reports that the Hollywood babe, Pamela Anderson actually never stayed in the house.

She was shown entering a special room that had no surveillance cameras and that was exactly the exit for her from the house. The source said that her arrangement was done at a five star hotel in Khandala, from where she used to come daily for her appearance in the show.

The source said, “Pam had already stated she wouldn’t stay with the house inmates under any condition.”

The TRP (television rating point) during her visit had tremendously increased that means people were quite curious to see the ‘Baywatch’ star, who was seen mainly wearing sarongs apart from the white sexy saree that she wore for her entry in the Bigg Boss 4 house.