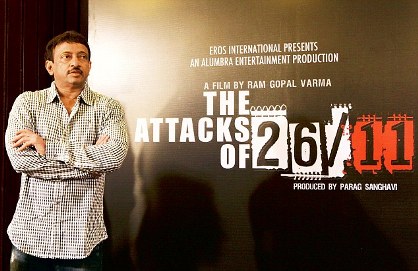 Filmmaker Ram Gopal Varma has his fingers crossed for his latest movie ‘The Attacks of 26/11’, which has released today, March 1, 2013. Varma said that he cannot make a typical Bollywood movie based on romance or comedy, as he finds the darker side of human beings more interesting.

The filmmaker is known for his vision while making movies and is known for choosing off-the-beat subjects, like that of ‘Nishabd’. Varma explained that it was just not in him to make a love story. The latest movie from the director is based on the attacks of 26/11 that took place in Mumbai, in the year 2008.

Varma, in an interview said, “I think may be the innocence of love is lost and realism of sex has gotten into me. I like understanding the complexities of (the) human mind, their rebellious nature. I would be much more interested in making something about (the) hanging of Kasab, than a story about (a) new age boy in love.” The filmmaker further stressed that he just cannot make a comedy either.

His earlier works in direction include ‘Satya’, ‘Company’, ‘Sarkar’ and ‘Rangeela’. However, the director does not care about criticism and says that he will continue to do as he pleases, so no matter what anyone says.