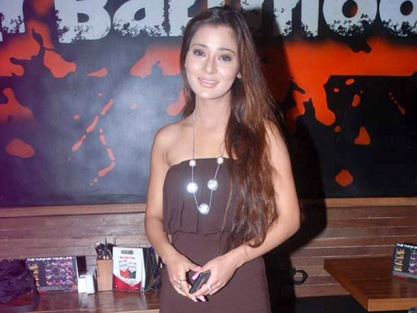 Controversial TV actress Sara Khan recently revealed that she has done an item song for a Bollywood movie. However, the actress did not describe the song in detail.

The 23-year-old actress said, “I have done one (item number), you will get to know soon… I don’t want to talk about it”. Khan was at the music launch of her debut movie ‘Saawariya – Khatu Shyam Ji Ki Amar Gatha’.

The actress added that she will talk about her role once things were sorted, but as of now she will be concentrating on her upcoming movie. In the new movie, Sara will be seen playing the role of a traditional girl Meera and said that the role wasn’t tough to play.

Actor Ashmit Patel stars opposite Sara in the flick and he will be seen playing the role of her husband. Patel, while talking about the movie, said that the audience is going to love to watch Sara on the big screen. Ashmit added, “Sara is a really good actress and like she said she has played such a role a lot of times on the small screen. You will enjoy watching her on the big screen”. The movie has been directed by Vinod Chabbra and is about wonders of Lord Khatu Shyam.