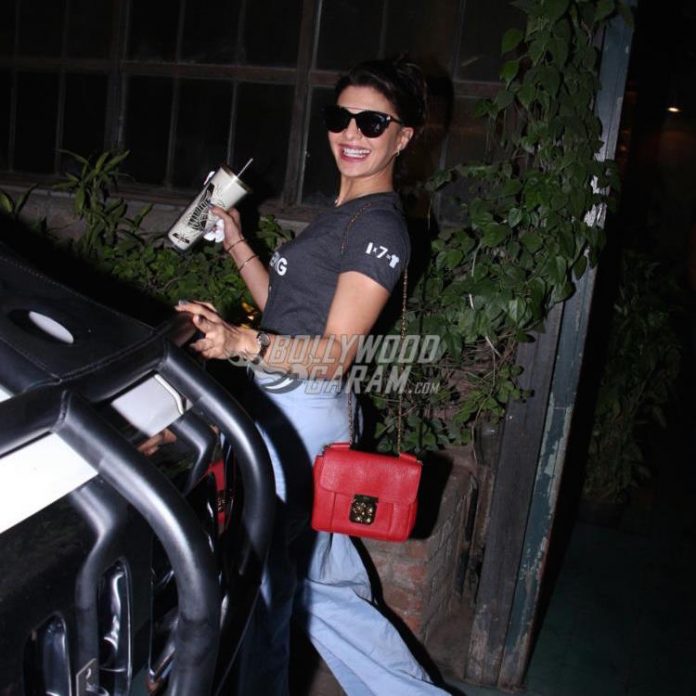 Sri Lankan actress Jacqueline Fernandez was seen spending casual time in Mumbai last evening, April 17. The actress looked trendy in blue denims with wide bottoms and a t-shirt. Jacqueline did not shy away from the shutterbugs and smiled as she came out of the café. The gorgeous actress looked like she was on downtime, taking a much-needed break from her busy schedule.

Jacqueline Fernandez has also turned entrepreneur! Recent reports suggest that she invested nearly 3.5 crores in a beverage company – Rakyan Beverages. The company is known by their brand name, Raw Pressery, and manufacture pure juices with no preservatives or additives. At the Raw Pressery launch event held yesterday she said, “I am excited to be part of a venture that I believe in. My travels across the globe has brought me closer to products which are free of any preservatives, and that’s why I decided to invest in this company.” The quality conscious star also has her own makeup line called Sealed With A Kiss, her collaboration with The Body Shop with products that are cruelty-free, meaning they haven’t been tested on animals.

On the work front, Jacqueline Fernandez is a busy person with many movies in the pipeline. The actress is currently filming for the upcoming movie Judwaa 2 opposite Varun Dhawan. The movie also stars Taapsee Pannu, who is in London with Varun for the shoot. Jacqueline is expected to join the cast soon.

The Dishoom actress also recently wrapped shooting for the upcoming movie Drive opposite actor Sushant Singh Rajput. Jacqueline will also be seen in another film Reload opposite actor Sidharth Malhotra.

She will also be playing host to international pop sensation, Justin Bieber, when he arrives for a concert in Mumbai as part of his Purpose Tour. She will be taking him across the city to tourist attractions, as well as dining with him at her proposed new restaurant.