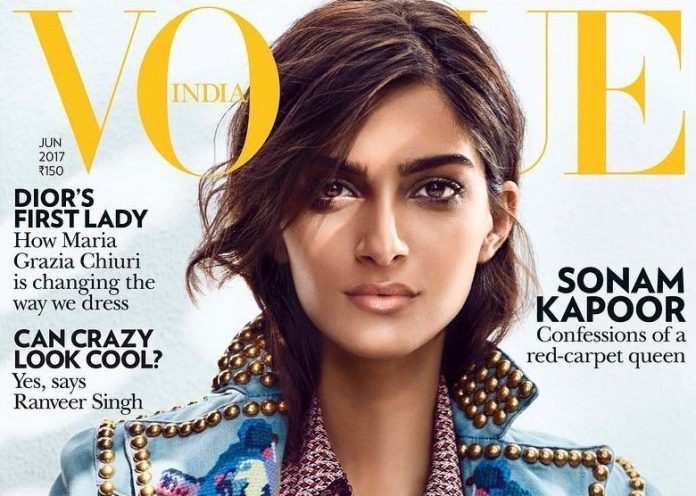 Fashionista Sonam Kapoor, who made it to the international red carpet at the 70th Cannes Film Festival 2017, has now landed the cover of Vogue India. This is the second time in its 10-year history that the Bollywood diva has topped the fashion magazine’s annual style list. In the upcoming June issue of Vogue India, the National Award winner talks about her two biggest passions – fashion and films.

Sonam Kapoor is known to be unmistakably comfortable in her own skin. There were critics who dismissed her as a fashion plate and predicted that her success would last only till the red carpet, but her National Award for Neerja is a proof to her self-belief.

In an interview with Vogue India, Sonam says that “Films without fashion and fashion without films don’t work.” She gives names of her style icons, Audrey Hepburn, Grace Kelly and Cate Blanchett, who are both serious actors as well as fashion favorites. “Both are visual mediums. It’s not only about dialogue and acting; I should appeal to the audience,” Kapoor says, giving the example of Neerja, where a uniform defined her character.

Sonam gives all the credits to her parents. “I got films from my father and fashion from my mother. Take these away from me, and I would probably be a librarian,” she laughs.

The 31-year-old actress belongs to the social media generation and is a strong believer in the power of an image. For her, Sridevi’s chiffon sari in Mr. India (1987) was a fashion breakthrough, as was Madhuri Dixit’s look in Tezaab ( 1988). “It’s just about how you wear it, and that’s all that matters.”, she says.

She further adds, “Fashion and style are about who you are as a person; you need to be individualistic.” She also admits that “Nobody can love fashion as much as I do.”

The cover picture of Sonam Kapoor was photographed by Signe Vilstrup and she was styled by Anaita Shroff Adajaina at Razzberry Rhinoceros, Juhu, Mumbai.

Read the complete interview of Sonam Kapoor in Vogue India’s June 2017 issue. It will hit stands on June 2, 2017.

Currently, Kapoor is filming with @radhikaofficial Fashion and style are about who you are as a person; you need to be individualistic,” she says. And Apte’s distinct personality, according to Kapoor, makes her very stylish, her other favourite being Kalki Koechlin. ( @kalkikanmani ) @vogueindia @anaitashroffadajania @subbu28 @georgiougabriel @shruti_thacker Shelly Jade’ bikini top, ‘Crab’ skirt; both @johannaortizofficial ? @signe_vilstrup