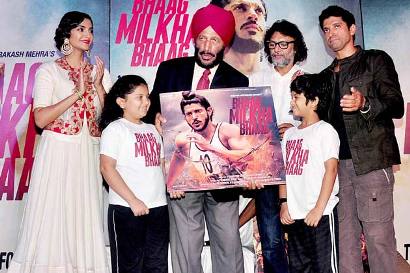 Former Indian track runner Milkha Singh – who is also known as the Flying Sikh – launched the music for Rakeysh Omprakash Mehra’s movie ‘Bhaag Milkha Bhaag’ on June 19, 2013. During the launch, Singh said that he hopes this movie inspires the youth of today to take part in the Olympics and bring many medals to their country.

The former sprinter said, “The coming generation does not know about Milkha Singh. I hope that they see this movie and get inspired to take part in the Olympics and make their country proud”. During Wednesday’s launch, Singh also revealed that he was approached by three to four different directors to make a movie about his life story.

The former athlete went on to say that his son was there when Rakeysh Omprakash Mehra approached him regarding the potential movie and he decided that he should make it with him. The movie is produced and directed by Mehra and is based on the real life of Milkha Singh.

The makers of the movie have portrayed the struggle of the former athlete and the role of Milkha Singh will be played by Farhan Akhtar, who will be paired with Sonam Kapoor. The movie is all set to hit the theaters on July 12, 2013. In the meantime, the makers have released the official trailer for the flick, which shows Farhan training hard for his race.