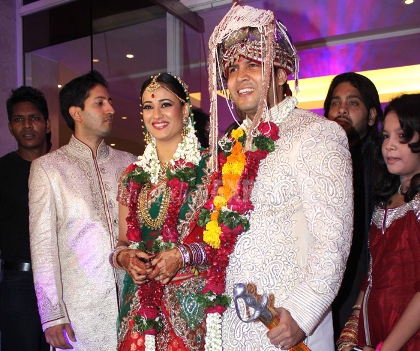 BollywoodGaram.com: TV actress Shweta Tiwari finally married her partner Abhinav Kohli on July 13, 2013. The actress recently announced that she would soon be tying the knot with Abhinav, while she was on the set of Jhalak Dikhhla Jaa.

The actress was previously married to actor Raja Chaudhary and was working on the TV series Kasauti Zindagi Ki. Shweta got married to Raja at the age of 18 and she also has a daughter from her first marriage. The actress got divorced in October 2012 and accused Raja of violence and verbal abuse.

The two separated, but Raja continued to trouble the actress with abusive behavior even after the divorce. In return, there are several complaints lodged against Raja, who has been involved in many controversies. However, Shweta is now all set to start her new life and her daughter Palak also seems to be happy with the new alliance. Sources close to the family said that Palak gets along with Abhinav very well and he is ready to parent Shweta’s daughter.