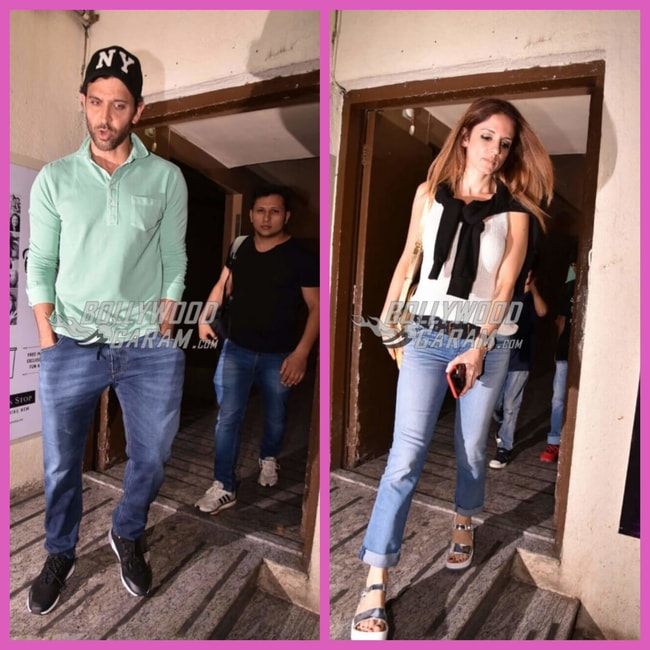 Hrithik Roshan and Sussanne Khan have been seen on several occasions together  and have been quite supportive of each other, even post their split

The couple who got divorced last year, Hrithik Roshan and Sussanne Khan were spotted with their sons, Hrehaan and Hridhaan at PVR Juhu in Mumbai. The duo have been frequently seen together with their kids and have recently been back from their Goa vacation during the Diwali weekend.

The two are also spotted at parties, holidays, eateries and movies as they spend quality time with their kids and this time too the couple was spotted enjoying a movie with their sons. Hrithik has been mired in controversy with Kangana Ranaut over the past few years over an alleged affair or the lack of it as claimed by Hrithik. Several court notices, allegations, shocking revelations from their lives and active social media posting – all of it has been a part of their controversial lives so far that have garnered way more attention than any of Hrithik or Kangana’s movies in these four years.

Hrithik and Sussanne were snapped in their car as well as they were coming out of the cineplex. While the Kaabil actor was seen in a minty green shirt paired with blue denims and sneakers and a cap, ex-wife Sussanne was spotted in a white sleeveless tee with a pullover tied around her neck and blue jeans with black belt and a golden handbag.

Not only is the couple amicable even after their split, the two have been seen together even at each other’s birthdays and indulging in some good time with their sons. On Sussanne’s birthday on October 26, 2017, as she turned 39, Hrithik made to the birthday bash in Lower Parel, Mumbai which was also attended by Sussanne brother’s Zayed Khan and his wife Malaika Khan, Sussanne’s friends from the film industry like Sonali Bendre, Twinkle Khanna, Gayatri Joshi and Karan Johar among others.

While the birthday girl was seen in a black dress with suede strap-on boots, all her guests except Karan were dressed in black as it seemed to be a colour code for the party. Sussanne, meanwhile, has been supportive of Hrithik during the entire Kangana Ranaut-Hrithik Roshan row.