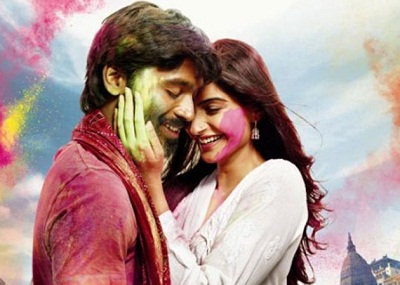 The first look of the latest movie from ‘Kolavari Di’ star Dhanush has been revealed recently. This will mark the entry of the star in Bollywood, much to the delight of his many fans. The new flick is titled ‘Raanjhanaa’ and has been directed by Ananad Rai.

‘Raanjhanaa’ appears to be a colorful movie and its first looks shows Sonam Kapoor and Dhanush playing Holi and covered in colors.  It is appropriate that the first look of the movie has been revealed during the Indian festival of Holi, which marks the celebration of the start of spring.

The release of Dhanush’s new movie has been delayed from its June 28, 2013 release, as another movie named ‘Ghanchakkar’ will be releasing on the same day. However, no official announcement was made about the release date for the movie.

The music for the new flick has been composed by legendary composer A.R. Rahman and will also star Swara Bhaskar, Abhay Deol, Mohammed Zeeshan and Deepak Dobriyal. The story of the movie revolves around the tried and tested formula of a small town romance.

Apart from Bollywood, the young star is busy with the Tamil comedy ‘Naiyaandi’ and is also finishing off the production of ‘Ethir Neechal’.