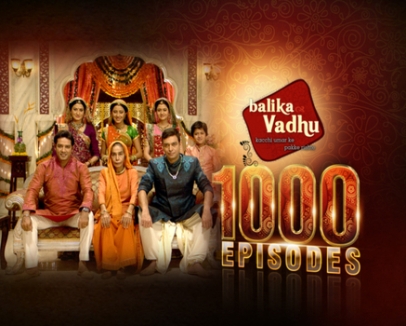 The popular TV soap ‘Balika Vadhu’ on Colours channel is now all set to reach a milestone with the completion of 1000 episodes. The show which started in the year 2008, will be completing 1000 episodes on May 14, 2012.

To mark the special day, the producers have brought a special one hour episode for its viewers on Monday. In 2008, the show started off with the issue of child marriage and portrayed the matter in a village setting and a story of Anandi and Jagiya.

Though the characters of the story have grown up and have taken a major leap, but the show has still managed to maintain its viewership. Apart from child marriage the producers have also concentrated on the other issues like woman empowerment, adult literacy and education for girls.

Actress Smita Bansal, who is seen playing the role of Anandi’s mother-in-law said, “I’m proud to be associated with this show. The audience have given us love and appreciation and we will keep going on.” In the first year the show enjoyed the third spot for the unconventional content with a TVR of 7.93, but then in 2009 it saw a jump to 10.18. But now as it continues to run in the fourth year, the show has managed to be in the top ten race.