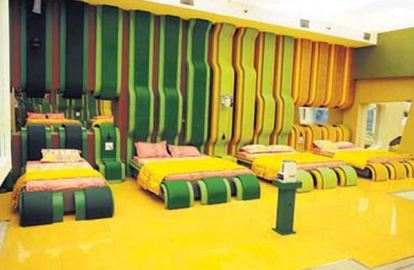 The house of Bigg Boss has now returned to where it belonged to. Last year the controversial TV show was shifted to a new location in Karjat and will now be shifting back to in Lonavala in the state of Maharashtra near Mumbai.

Reports say that the sets of Bigg Boss was shifted from Lonavala to Karjat as the members of the political party Shiv Sena, brought the little town to a near halt when they called for a strike when Pakistani celebrities Veena Malik and Nawazish Ali were invited to be a part of the show.

Now the organizers of the show have confirmed that Lonavala will be the location again for the sixth season of Bigg Boss. The show is expected to hit the TV screens in the month of October this year.

Earlier reports said that the show will be hosted by Bollywood Salman Khan as usual and that he will be managing it all by his own. Last year actor Sanjay Dutt hopped in to the show along with Salman. Salman last year was absconding from most of the episodes of the show as he went through a surgery. The ‘Dabangg’ actor appeared for a very few episodes as he got busy shooting for ‘Ek Tha Tiger’ immediately after recovering from a surgery.