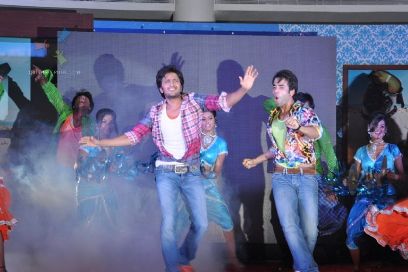 The makers of the movie ‘Kyaa Super Kool Hain Hum’ on July 2, 2012 launched the music of the movie in an event. The event saw the cast Riteish Deshmukh, Tusshar Kapoor, Sarah Jane Dias and Neha Sharma.

Riteish and Tusshar Kapoor at the launch event performed on some of the cool tracks from the film. Riteish just before the launch Tweeted, “Today is the music launch of #KyaaSuperKoolHaiHum at R Mall, Ghatkopar(6 30pm) – See you there for all the naach gaana”. ‘Kyaa Super Kool Hain Hum’ has been directed by Sachin Yardi and is all set to hit the silver screens on July 27, 2012.