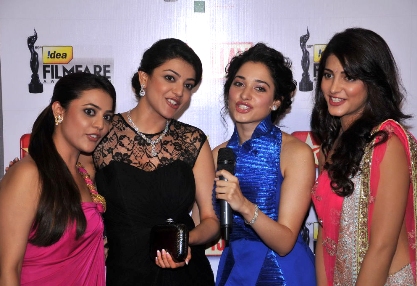 South Indian movie ‘Aadukalam’ grabbed all the attention while it swept all the top honours at the prestigious 59th Filmfare Awards. The movie has already won many awards and has now continued its dream by claiming five awards in different categories.

The award ceremony was conducted on July 7, 2012 at the Sports Development Authority of Tamil Nadu in Chennai. The event was attended by many of the South Indian celebrities from the Tamil , Telugu, Kannada and Malayalam film fraternity.

Bollywood actress Deepika Padukone was also present at the event, while Shruti Haasan, Trisha, Nayanthara, Kajal Agarwal, Ramya, Namitha and Tamanna Bhatia added glamour to the event. Here is the list of the winners (Tamil).