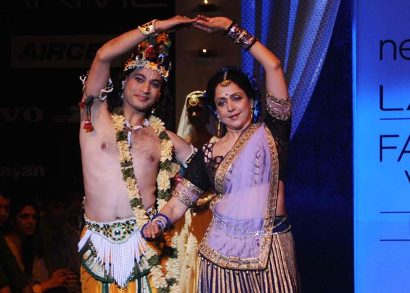 Popular celebrity designer Neeta Lulla’s show at the Lakme Fashion Week reached to a new high when veteran actress Hema Malini performed as ‘Radha’ on the ramp on August 7, 2012. The new line of the designer was based in ‘Radha’ and the actress was seen dressed up as the character.

Malini performed a short Kathak dance and was accompanied by a male dancer who was dressed as Lord Krishna. The actress stole the show in a dark purple lehenga choli with a light purple dupatta embroidered in gold.

Neeta after the show said, “I had no clue what made me go with Hemaji. It was not difficult to convince her. When I approached her she agreed readily. I had Krishna on my side and things fell into place. I have dressed her since 10 to 12 years, it never struck me to do something like this. There is the right time for everything. I never planned it”.

Apart from Radha, the line also showcased a wide variety of exquisite lehengas which were teamed with traditional cholis in bright colours like blue, red and peacock green. Neeta while talking about the collection said that Radha has always been a symbol of grace and also the epitome of beauty and romance.